Bohušovice Milk Company introduced the new product Skyr to the Czech market at the beginning of May. This in itself created a brand-new segment of dairy products because it is neither yoghurt nor quark. For the implementation of the campaign, the company chose Smart Point and Business Factory, with Business Factory in charge of executing the Facebook component of the campaign. 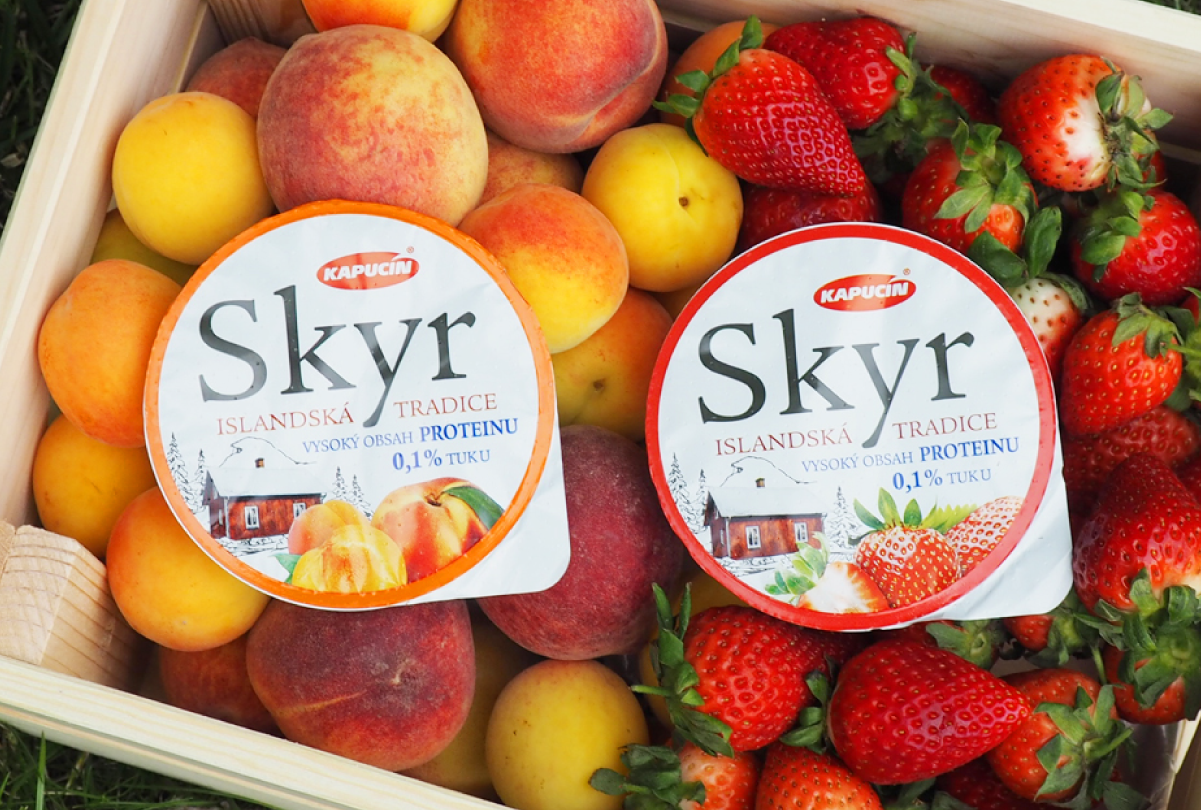 Skyr is a traditional Icelandic cultured dairy product and its adaptation outside of Iceland is carefully monitored and controlled. The technology has to be respected and a specific bio culture has to be used. Bohušovice Milk Company is the first and only company allowed to produce and distribute this product under the name Skyr in the Czech Republic.

Skyr was a brand-new product on the market and therefore it was important not only to increase awareness of its existence and its benefits, but also to reach the most relevant users and to use the opportunity to present them the product over a length of time and motivate them to try and taste the product.

A sequenced campaign was the ideal strategy for these objectives. The campaign gradually introduced the product to users by making it visible to the target audience for three months while providing long-term support for both TV and other offline campaigns.

The campaign was therefore divided into 4 phases:

Before the product was placed on the market, the aim was to provide information on the existence of Skyr as a product type. This part was realized through video seeding in the JenŽeny.cz community with a targeted overlap in key interest groups.

The format was a funny summer video recipe for a smoothie which included Skyr as one of the ingredients. Subsequent interest and engagement in the form of comments sparked discussions of “What is Skyr?” We supported this interest in the product page and Wikipedia page, where the user could learn about the product before it was launched.

With engagement audiences made up of users who watched more than 50% and 75% of the video, it was possible to re-engage users in the next stages.

With the onset of May, the TV campaign and the launch of the product itself had begun. At this stage, it was necessary to create a concerted intervention in the relevant target groups so that the user could possibly associate Facebook advertising with television and offline advertising. We utilized tailor-made videos for a digital environment that kept the same visuals as well as its main character, Ondrej Bank, who was the face of the product.

The relevant target groups were focused on…

Even in this section, thanks to the engagement audience of the video, we have earned another target group of users who have watched the video.

As a follow-up to fieldwork and linking to other communications, the next phase of the campaign focused on stenghtening the product presentation to users. To do this, we opted for static ads targeted to users who have seen more than 50% of videos from previous phases.

Clicking on the ad led to a product page where the user could learn more about Skyr. From this time on, we eliminated the Website Custom Audience of users who have already clicked on the product page. Thanks to this, we have supported maximum intervention.

In the final phase, the goal was to expand the group of users we’d been addressing for two months. We focused on product visibility in regional cities and the surrounding areas as the largest economic centers with purchasing power.

Cities were divided into individual targeting for maximum relevancy and interest. Each text suggested that this new product is also available, for example, “… in České Budějovice …” so that the user who reads the message in their News Feed registers that it is a post or advertisement that concerns them.

From the client’s order, it was clear that the backbone of the campaign would be television spots. So, we tried to use the situation and support a somewhat “passive” TV campaign with effective and CS-friendly tools offered by Facebook. Through shooting the TV spot, we were able to simultaneously create special original material for online campaigns. We were also able to use the favorite behind-the-scenes outtakes.
We tried to extract the personality of Ondrej Bank to the maximum. As an ambassador of the product in various situations, he demonstrated the benefits of the product. Skyr was also presented in interesting contexts. Additional visuals included product photos, collages, and inspirational recipes.

The reactions and responses to the partial steps of the online campaign were very useful to us and to the client—we recorded and analyzed the gradual increase in awareness of this new type of product for Czechs, worked on comments and queries, and evaluated the success of individual creatives, while sales representatives adjusted the targeting of posts according to the current listing, which continued to expand.

This experience, with such a comprehensive campaign, was very valuable for us. We have further developed a new way of thinking, even with a client who preferred to use standard marketing tools.

The invaluable parameter of the Facebook campaign is also the exact measurability which, for example, is noticeably missing from prints or, for the most part, from most outdoor media, which record a number of variables. In the follow-up campaign next year, we are ready to recommend Facebook once again, even as a backbone communication tool instead of the above-mentioned TV spots.

Thanks to the ROI Hunter platform, the campaign has been optimized constantly for both ad placement and targeting, and also according to age and gender, to identify the segments and target audiences with the best response to and best interest in the product. This allows the client to verify the impact of individual texts and arguments on specific segments and to verify that all estimated target groups respond as expected. In a longer campaign, these findings can be applied to non-Facebook ads for better media placement.

Besides using Custom and Engagement audiences, the distinctive feature of the campaign was sequencing the entire campaign to also use Brand Awareness optimization, specifically with optimization within reach. Brand Awareness is the ideal solution from a brand-name point of view because it optimizes for maximum attention to posts. As a result, the campaign has only focused on those who give the banner an appropriate amount of attention, at least visually, even if they do not interact with the ad.

Brand Awareness with Reach optimization, however, appears to be a very powerful tool to minimize the price of a unique reach, significantly undermining the impact of the Reach and Frequency format.

When comparing CPMs (with the same campaign goal, same time, and same client), we get an overview of the cheapest current format for the cost of price per click. Relatively expected are the best optimizations on Daily Unique Reach and Video Views, but also the new Brand Awareness format.

When we compare prices for its long-term unique reach, Brand Awareness clearly shows that when optimized within reach, it delivers significantly better outcomes than long-term campaigns with traditional Daily Unique Reach optimization.

So, Facebook has once again proved to be a very good channel for brand campaigns because… 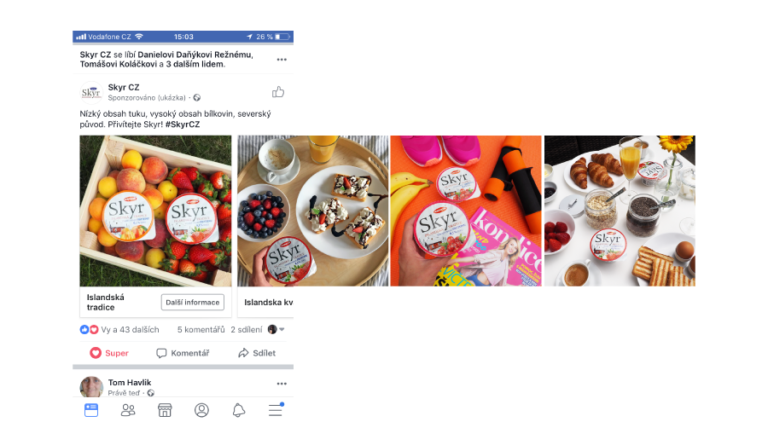 In total, the campaign has hit more than 1,665,000 users, and in the case of Facebook, they are real people and not just individual browsers (cookies). A highly-watched indicator is the frequency of brand campaigns, of which the goal is to use resources efficiently on the same users and not to overwhelm the user too much as to avoid negative emotions toward the brand or product.

Despite multiple phases, frequencies through optimization and caping remained at a reasonable 3.88. This is also a confirmation that the target audience managed to be addressed regularly and be reminded of the product during the campaign.

With a total of 495,000 video views of the video campaign, JenZeny.cz managed to get another 260,000 users who watched more than 50% of the Skyr video containing the smoothie recipe.

What the campaign brought: